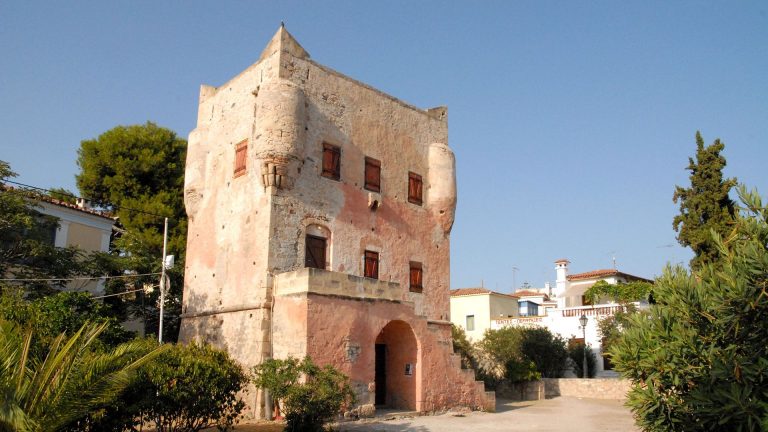 The Tower of Markellos constitutes a landmark of Aegina island and is an edifice of major historical significance. Located near the center of the main town, this impressive pink edifice catches the eye of the visitor with its Venetian architectural style and imposing facade.

The Tower was named after Spiridon Markellos, a distinguished fighter of the Greek War of Independence and a celebrated member of the renowned “Filiki Eteria” (Society of Friends). According to tradition, Markellos erected the building in 1802, however its architectural style has apparent Venetian influences and resembles part of a greater fortification, thus is more likely to have been constructed in the 17th century, functioning as a watchtower.

The building’s major significance lies in its leading role in the political developments before and after the Greek Revolution of 1821. During the war, the tower used to host many important figures, such as activists and politicians, Greek and foreign alike. After Greece became a free state, Aegina was declared the newly-founded country’s capital and the tower of Markellos was turned into the residence of the Governor Ioannis Kapodistrias from 1828 to 1829. Later on, it hosted the State Treasury as well as many other ministers.

Nowadays, the tower is home to the Kapodistrian Cultural Center as well as the Spyros Alexiou Social Awareness Centre. The tower is open to the audience only during the cultural events and artistic exhibitions that are frequently organized.