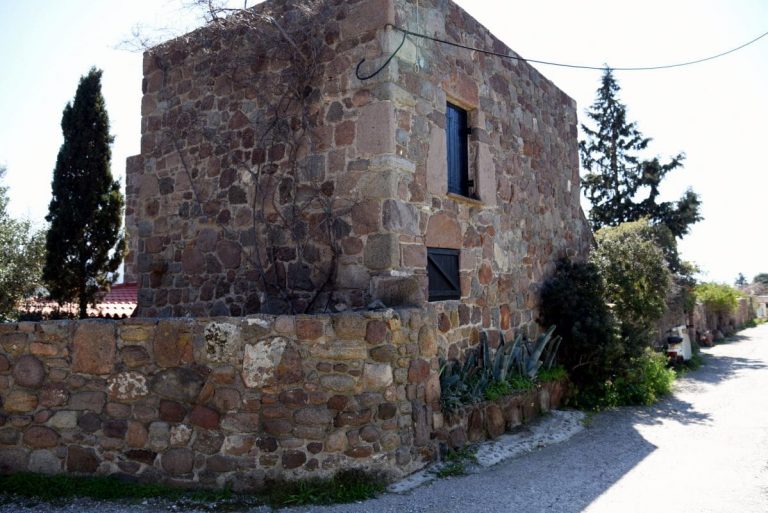 Pachia Rachi is a traditional settlement built at the foot of Mount Ellanio, on a steep slope above Marathon. It has old picturesque traditional stone houses, paved cobbled streets and overlooks the sea from above. From Paleia Rachi the view to the sea, which is on the right, is spectacular. In the background you can see the town of Aegina and further to the left, the lush green Agistri. In front is the picturesque Perdika, the islet of Moni and behind them is the peninsula of Methana. On the beach you can see the settlement of Marathon.

Pachia Rachi was one of the most important villages of the region. Many fighters of the 1821 Revolution came from here. The village had many inhabitants, a school and the inhabitants were engaged in agriculture and animal husbandry. Before 1950 it had 55 families and a school with 71 children. The Church of Agios Dionysios stands out, which began to be built in 1813 and was finished in 1864, with its bell tower and blue dome, and the smaller Church of Taxiarches, built around 1810, is equally impressive.

From Pachia Rachi a dirt road to the west leads to the site of Sfirichtres, at the foot of Mount Ellanio, where there were steps leading to the archaeological site of Ellanio Zeus, where the oldest altar dedicated to Zeus was built. In this area there was also a guest house and two cisterns in which rainwater was collected. From the excavations carried out at the archaeological site, a bronze hydria, jewellery, metal objects and jars of wheat were found. Above the altar of Zeus of Hellan there is today the Church of Taxiarches.

From Pacheia Rachi the road continues, passing through the village of Anitsaios and ending at the seaside village of Portes, and from there to Alones and Agia Marina.