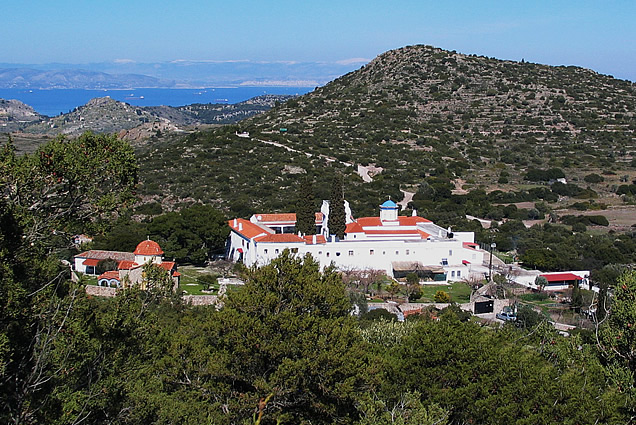 It was built in the 17th century and is one of the old monasteries. It was formerly in the Kypseli area in Leonti, until the monks transferred the icon of Virgin Mary to the present location, deep in the mountains, in order to protect it from the pirates.

The purpose for which it was built was therefore to provide a safe place for the protection of the monks from pirates. Consequently, its architecture is very special, with characteristically high walls and a three-storey tower.

The tower, 20 meters high, was built long before the church, around 1600, while the church was built in 1800 to replace the previous one that had been burned completely.

During the 19th century most monastic estates were expropriated, this particular monastery was always very rich in land property, and the monks left.

Since 1935 Chrysoleontissa switched from male to female Monastery and now there are about 10 nuns living there.

The Monastery of Panagia Chrysoleontissa is located in the center of the island, on a mountainous, very high and isolated point of Aegina. It is just 2 kilometers from the Monastery of Agios Nektarios.

The monastery is known for its ornate carved icon screen and its beautiful frescoes as well as for the icon of Virgin Mary of Chrysoleontissa.

Every August 15th the biggest festival of the island of Aegina takes place here. It features a huge garden at its center.

Its contribution was very important in the Revolutionary effort of 1821, both in terms of spiritual and financial support.